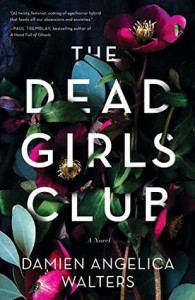 One of my biggest pet peeves with books is when the blurb is misleading. I get that it should catch the attention of would-be readers, but if you tell me it's a specific thing, I darn well expect it to be that thing. The Dead Girls Club is not a supernatural thriller. Supernatural adjacent, maybe, but other than the made-up stories of one troubled little girl and another letting it get in her head, there was nothing supernatural here. Honestly, I didn't find anything remotely thriller-like either. Here's where I put in that none of that would've been a deal-breaker for me. I still could've enjoyed a good drama with some tragedy thrown in. What I got was a lengthy, wordy story that took way too long to get through. To be brutally honest, I was bored through about 75% of this one, and it was only sheer determination that made me push through to the end. I did like some of the "Then" chapters until they became repetitive with pre-teen drama and angst, but today's Heather got on my last nerve. I finally got to Becca's death, and yes, Becca had a tragic life, but when it came right down to it, I only had one thought about the night this girl died - they were young, yes, but they were old enough to know better. There are a couple of decent twists toward the end that could've been great had the book been better executed, but they were just too little, too late for me. Then an ending that was less than satisfying, to say the least, was just adding insult to injury.