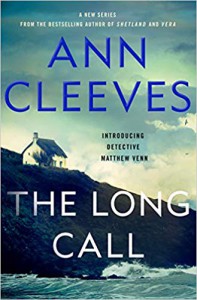 The Long Call turned out to be a really long read for me, mostly because I kept setting it aside for something more interesting. The writing is stilted and there are odd phrasings and some out of context sentences here and there that add to that stilted affect. Like one lengthy paragraph about Jen's kids and child minders that ends with a sentence about Jen still having sexy dreams about one child minder and his 'tight bum.' Umm... Ok, maybe that was an attempt at giving the reader some insight about Jen, but it just left me confused about its relevance to anything in the story, including the paragraph it accompanies.

This is a police procedural, so I didn't expect much in the way of those edge of your seat moments that make a good thriller, but I found most of this book just plain boring. It did have potential but most of that got lost in the slow pacing of the story.

On a positive note, there is a lot of diversity, which is always a good thing as far as I'm concerned. That said, this one got a little over the top with the characterizations of people. The protagonists are all open-minded and completely accepting while everyone else needs an attitude adjustment because their beliefs are just wrong. I'm about as open-minded as it gets, but I realize that it's rarely so black and white where people are concerned. This book gives voice to the idea that there is no gray area, and it started to feel more like a soap box than a story.

This is my first experience with Ann Cleeves, and I find myself quite underwhelmed. This isn't a story I would recommend and given my feelings about this one, I don't see any reason to continue with the series.