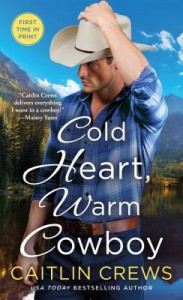 Second chance romance is one of my favorite romance tropes, and I'm always up for a cowboy romance. Cold Heart, Warm Cowboy is both of those, but it felt like this book forever to get through. The pace is incredibly slow and way over-dramatic, mostly due to page after page of the characters' inner turmoil. I can get behind some drama for the characters, but that's really all I got from this one. It was either Ty's angst about his memory, which I didn't quite understand. I mean, I get that he was upset over it, but why keep it a secret? Then we have Hannah, who went to Ty's home for one reason - to reveal something - yet, she goes days and then weeks without a word. What? Hannah's secret bothered me and honestly, it didn't do much to endear the character to me. That wasn't helped by Hannah's opinions of herself. She's almost obsessive about her looks and the fact that she was a 'rodeo queen.' The number of times that comes up in her head or out grew tedious and again, didn't help with making her likable or relatable. In the end, the drama overshadowed anything resembling a romance, and it was much harder to pick back up than it was to set aside for later.