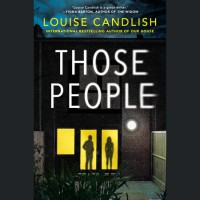 We've all experienced, either directly or indirectly, those neighbors. The ones who don't fit in with the rest of the neighborhood. Maybe they throw too many loud parties, or don't take care of their lawns, or take up too many parking spaces on the street - whatever the reason, they are a source of hostility to their neighbors. Those People throws in all and sundry to the new residents on Lowland Way to create plenty of hostility for the rest of the street - something that went over the top for me. Darren and Jodie were everything quiet little streets don't want in a neighbor and then some, so much so that they were almost caricature-like. But that's okay, we aren't really supposed to like them. In fact, I'm not sure that we're meant to like any of this story's characters. I certainly didn't. In the end, I wasn't sure if anyone was really meant to be the good guy. However, I could've been okay with that, and here I'll add that I did like the format for this one. It bounces between characters as we get what's going on now along with what led up to it. The problem is that the story is way too slow and the twists just aren't that twisty. I felt like the author was so focused on showing all the flaws in these characters that she forgot to leave any surprises when it was time for those twists. Most people would never consider going to the extreme lengths that these did, but considering what we're told about them from the beginning, I wasn't at all surprised with the way it played out in the end. Maybe it's just me, or maybe I expected too much, but I spent most of this book wanting someone, any one of these characters, to really surprise me and it just didn't happen.