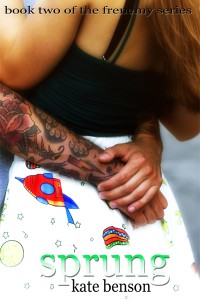 This second book in the Frenemy series wasn't quite what I expected. Sprung has Dash and Evie figuring out the whole relationship thing. While their banter is amusing, it began to feel like that and sex was all they had. This pair was either insulting each other or getting naked, and sometimes both, which is fun for a shorter story, but it leaves little room for romance. The chemistry between Dash and Evie is there in spades, and their emotions came across quite well in Frigid, but seemed to be missing here. Mason acted more like a jealous ex than an over-protective brother and the whole family seems to be keeping secrets. I did like Dash and his big heart even while freaking out about commitment made him an endearing and fun character. This one does have a bigger cliffy than the first book, which I can only imagine will lead to more panic from Dash and hopefully will have Evie growing up a bit. For those that enjoy an amusing, lusty read, this one has plenty of that. The author is talented and the story has its moments, but I did expect a bit more romance from this second in the series.