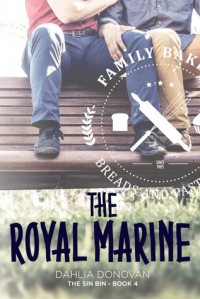 Akash's friends seem to all agree that he needs a date, but it's apparent that they didn't communicate when he shows up at the Sin Bin to find two blind dates - one with a chip on his shoulder and the other a stoic royal marine. It doesn't take long for the attraction to bloom between Akash and Hamish, but their romance is a slow burn with them taking the time to get to know each other. We also get the added element of suspense with a mysterious fire and Hamish's dangerous job.

Dahlia Donovan is new to me, so I hadn't read the earlier books in this series, but other than so many names being mentioned at the very beginning, I had no problem following the story. There is plenty of interaction with secondary characters, but this one is primarily about Hamish and Akash. I have to say that I was quite impressed with the author's writing style. The book is wonderfully written, the characters are interesting, and the dialogue is witty and often funny.