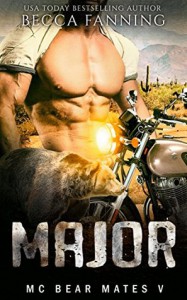 This series just gets better and better! Major has been noticeably absent off and on throughout the series with those absences increasing in book four. Now, with this fifth installment, we know why and where he's been. The problem isn't what he's doing, but who it's with. Then he runs into Pip and as is the way with Fanning's bear mates, Major's world is rocked. Pip's gift is the best one yet and certainly comes in handy, but the fact that this pair has a past is the hardest for them to overcome, creating just the right amount of angst for the story.

The book is well-written and engaging enough that I read it in one sitting. Much like the rest of the series, it's full of romance, action, a bit of steamy fun, and some suspense as the Nomads take the war with the cartel to the next level. We also get to revisit past characters to see how they're doing and I have to add that the banter between Christie and Mundo was fantastic!