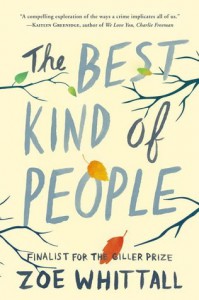 I found this book to be more confusing than anything else. The story starts inside the head of school shooter, bent on taking out his girlfriend who works at the school. I assume this is to show how George's heroic actions during the crisis endeared him to the community, but there is little else about it throughout the book. From there, it jumps to a few years later and into the middle of an intimate scene between Sadie, George's 17 year old daughter, and her boyfriend, and I'm still scratching my head over the relevancy of that. Once George is arrested, I expected the real story here to begin taking shape and thought that I would learn something of his guilt or innocence, which would create some suspense to the story. Instead, I got what began to feel like an information dump about a lot of other people. There are pages and pages of the sexual activity of teenagers, along with their drug use and drinking, but the story reads as if all the teenagers in this community are participating in such activity, making it hard to empathize with Sadie's behavior being the result of the charges against her father. In fact, I found little about any of the characters to elicit empathy, other than the wife. Joan's behavior and reactions were the only ones that made much sense. But, as crazy as it sounds, I did keep reading, mostly out of curiosity about George than anything else, but the bulk of the story was just more of the same. George, who this story supposedly revolves around, isn't what I would consider even a secondary character. Finally, we get to the ending, which was a disappointment at best. The conclusion is rushed and unrealistic in many aspects. After giving it some thought, I believe there were just too many characters and too much going on for the author to stay on track and instead of one family's struggle to cope, it became a bit of mess of several characters running in different directions.