Great addition to the series 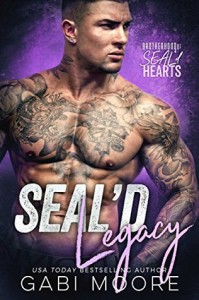 We get something with this May/December romance that we don't see very often - the woman is the December part of the pair, and it's done so very well. Ally isn't a cougar by any stretch of the imagination. She's been through a lot, and for a single mother in the workforce, she has an interesting innocence about her. In fact, both characters are not what we see so often in romance. David is wise beyond his years, having seen his own share of troubles. The romance is a bit of a slow build, but when David and Ally heat up, they are Kindle melting hot. But, David and Ally's story isn't just about the romance. There's so much more packed in these pages and as she so often does, Moore touches on some dark topics that certainly tug on the emotions, topics that are not only current, but also quite prevalent in today's society. I won't go into detail on that because that would spoil it and this is one that shouldn't be spoiled. To sum it up, SEAL'd Legacy is a romance, but it's also a breaking away from the things that hold you back, overcoming adversity and hate, and making a life surrounded by people that lift us up story. Of course, it's not all serious. There's plenty of scorching, sexy fun and some chuckle inducing dialogue between these characters to keep things from getting too dark.

This reader will be anxiously awaiting the next book in the series!