Not what I expected... 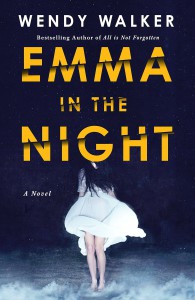 Emma in the Night wasn't at all what I expected and I wouldn't quite call it a thriller. When I read a thriller, I expect to be on the edge of my seat, dying to know what happens next. I was interested and the story was suspenseful, but the story was a bit slow and even dry at times. That said, it was oddly compelling and certainly disturbing.

Considering their parents and upbringing, Emma and Cass were almost doomed to be at a little messed up. In a not exactly successfully blended family, the only person that I found to be remotely normal was the oldest brother, Witt.

The story is not only twisted, but there are plenty of twists and turns as it progresses, which is something I look forward to in a psychological tale. I was left scratching my head at times with Cass' recounting of her time away as it seemed to become more and more convoluted. By the end, her motivations were made clear, but even now, as I ponder the story, I'm not exactly clear about the way she went about it all.

The biggest drawback for me was the switch in point of view. Throughout the book, we hear from two people, Cass and Dr. Abigail Winter. Cass' chapters are all in first person, while Abby's are in third. My first thought was that it was done to help show Cass' frame of mind during the seven days following her return home, but Abby's chapters also reveal her own thoughts about Cass and the family during that time. The switches from chapter to chapter took some getting used to and in all honesty, I found it to be more of a distraction than anything beneficial to the story.

Overall, Walker does have a unique writing style and the story had potential, but it just didn't quite live up to expectations. It's not a bad read, but turned out to be merely an okay one for me.