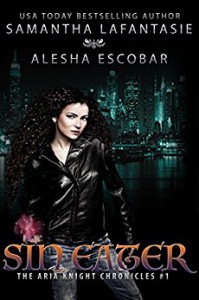 I'm always on the lookout for a good Urban Fantasy series and was quite impressed with Sin Eater. As with most books in the genre, we get wizards, vampires, and a bit of telepathy. What sets this one apart, and is a unique and interesting idea, is the sin eater angle.

The writing style and opening scene quickly drew me in and the fast pace and twists kept me turning pages. Aria is a strong, likable character that you genuinely want to root for. In fact, the book is full of great characters - some likable, some not so much (kind of the point, right?). I really liked Harry and his cast of characters, and I look forward to seeing more of him in future books.

I also like that the current conflict is resolved by the end of the book. There are, of course, still unanswered questions and more trouble on the horizon, but we aren't left with a huge cliffhanger to stew over.

I can't talk about an Urban Fantasy without mentioning world-building, which is excellent in this first in the series. Characters are introduced and developed, and we learn exactly what a sin eater does and why, as well as their place among other supernaturals in the Aria Knight world.

Overall, Sin Eater is a solid start on a promising series and I can easily recommend it to anyone who enjoys Urban Fantasy. I, for one, will be anxiously awaiting the next book in the Aria Knight Chronicles.